Pictures.  They say a picture is worth a thousand words.  They also say that Henrik Ipsen was the first person to use the phrase!  I've had a few favourite pictures over the last seven years I've been at Evergreen.  I'll focus (pun intended) on one picture in a minute but let me share a couple in the preamble!  And as far as the preamble goes it was difficult to narrow the "field" down.

For those of you who know the Kroeker family, you know that we really (really) like Disneyland.  Bev's parents used to be snowbirds in Palm Springs (Sky Valley) and we would vacation there every year.  Disneyland was a quick trip away and so our love for Disney was launched.  Here we are as a family on Radiator Springs Racers playing Uno.  I wonder who won? 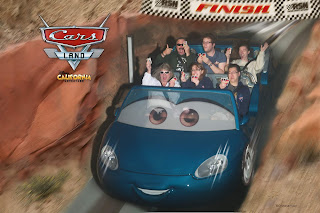 Thanks to our friends Andrew and Lisa we discovered Maui back in 2015.  It has become one of our most restful vacation spots.  No matter how good your picture is, it's not even close to being there in person. 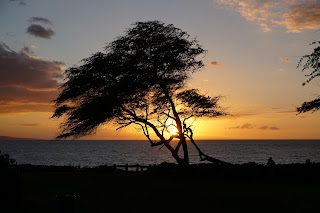 Finn and I go on regular walks.  Sometimes I bring my phone and often I don't.  Very happy I had my phone on me for this shot.  Anyone know where I was standing when I took the picture? 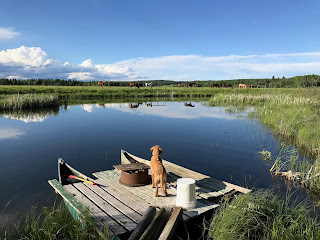 Kids!  My mom used to remind me that kids were baby goats and that I should call them children.  Well we are a children's camp for sure.  While we have all kinds of groups during the year, our focus has always been children in summer.  Here are a couple of my favourite campers! 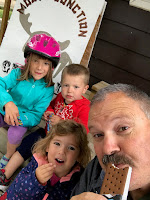 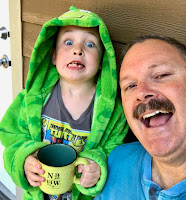 This is the picture I wanted us to "focus" on.  You've seen this picture before and it's on track to be one of my absolute favourites.  We brought back the rodeo this summer and even though it was a bit of a work in progress, the summer campers and family campers really enjoyed it.  One highlight of course was the exploding outhouse.  (Have you heard of the book Race To The Outhouse?  Written by Willy Makeit and illustrated by Betty Wont)

Isn't this a great picture!  Starting at the far left and moving to your right we have Willy Makeit (Harold), Router (Ken), Acre (Helmut), and Stinky Pete (Dylan) - who's obviously fully engaged with the YMCA song!  Take a moment to click on the picture to make it bigger.  One of the first things you'll notice is the different understanding of the letter Y.  Willy has the tightest Y and by time we get to Pete...well I'm not sure if that's much of a Y anymore.  Willy looks like he is really concentrating, Router and Acre look a little surprised, and Pete  - as we already mentioned - is fully on board!  Did anyone notice Acre's boots?  One cowboy boot and one rubber boot.  Seems like there was a 50% chance of rain that evening.

I just want to say a big thanks to these four men for serving us this summer.  Harold was at the barn all summer, Ken built us a wack (and by wack I mean a wack) of directional signs, we had a hard time getting Helmut off the lawn tractor. and Dylan served us in maintenance alongside Rolf.  There is no way that we could run summer camp without our staff and volunteers, so if you think you've got the mojo to sing the YMCA song complete with actions, consider joining us next summer.  (We'll take you even if your actions are off key!)

We had four companies on site last week for a mandatory pre-bid meeting.  These companies will be bidding on phase 1 and phase 2 of our new and exciting septic system.  (You'd be hard pressed to see the septic system as exciting based solely on this picture!)  The bids will be awarded in November with construction scheduled to start April 15th - subject to frost! 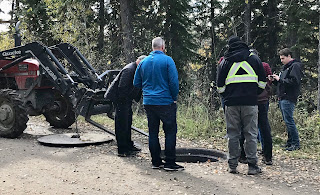 Thanks again for your ongoing support. 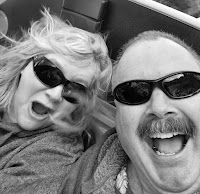