Twas The Night Before Pond Hockey

Well if you're reading this today (Thursday), it's actually two nights before Pond Hockey!  Thanks Katherina for being my guest blogger today.  Enjoy! 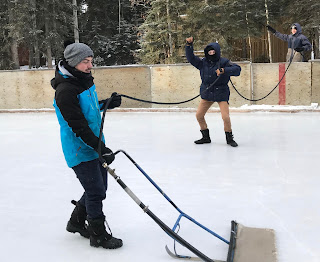 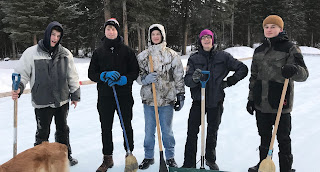 Twas the night before Pond Hockey, when all through the camp
Not a staff member was stirring, not even little Scamp
The hockey sticks were placed by the rink with care,
In hopes that Pond Hockey would soon be there;
The hockey players were nestled all snug in their beds;
While visions of slap shots, body checks, and trophies danced in their heads;
And John in his Blackhawks jersey, and Lane in his Calgary theme
Had just settled their quarrel about who had the best team
When out on the rinks there arose such a clatter,
They both sprang from their seats to see what was the matter.
Away to the Welcome Centre they flew like a speed skater
Tore open the doors and hopped in the Gator
The moon in the sky and the freshly fallen snow,
Gave the glows of midday to the rinks down below.
When to their wondering eyes did appear
But the quadboni running with no snow left to clear,
With drivers so bundled and quick
They knew in a moment it must be Rolf and Dylan his sidekick
More rapid than bunnies his shovelers they came,
And he whistled, and shouted, and directed them by name:
Now Cicelly!  Now, Feli!  Now Jonas and Sina!
On Jono!  On, Lukas!  On Wendell and Carolina!
To the side of rink one!  To the side of rink two!
Now shovel away!  Shovel away!  Shovel away!  Hop to!
As the snow in the midst of a winter blizzard flies,
And when they meet with the forest, fall to the ground;
So too that's where the ice makers can be found
Pulling hoses full of water, and a little Zamboni too -
With a mighty shout, Lane and John heard on the rinks
The laughing and working, and winter boot clinks.
As John and Lane turned the Gator around,
Bob rushed to croki curl with a bound.
He was dressed in full hockey gear, from his head to his toe,
And his clothes were all covered with dog hair and snow;
A frozen jug in his hand and a hockey stick he had slung on his back,
He slid the jug across the ice with a smack.
His eyes - how they twinkled!  His ice fishing jokes, how merry!
He called for Bev to come see his great shot
While Courtney and Autumn found the perfect hot chocolate spot;
Harold, Eden, and Luis practiced their reffing calls,
While Theo, Max, and Jonah decked out the dining halls,
And Ken and Sarah cooked and baked to feed ravenous appetites.
Down at the barn Katherina and Mikaela got the Clydesdales ready with care,
And back in the office Colleen prepared for the players who soon would be there.
The rinks were prepared, they were ready to go
While shovelers prayed that it would no longer snow.
Lane and John looked around at the works in awe,
Pleased with the way it came together, they let out a great whoop and yee-haw!
As the sun shone on the camp down below
It could be heard over the speakers, so everyone would know,
"Happy Pond Hockey to all, and to all a good game!" 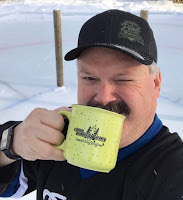