One of the craziest storms that I’ve been in happened while I was leading Trails Away in the summer of 2015. We were riding in one of the fields across the creek when I heard what sounded like a herd of moose running through the trees to our left. When I turned to look in the direction of the noise, I did not see a herd of stampeding moose. Instead I saw every single tree bending low as if they were being pushed down by an invisible hand while a wall of rain moved through the trees and across the field. I shouted for my girls to get off their horses as quickly as possible, and just as the last pair of boots touched the ground we were instantly drenched from head to toe. We led our horses over to the barn as fast as we could, but when we opened the door so that we could take them inside every horses froze. You would think that they would want to get out of the storm as soon as possible, but they were paralyzed with fear when they looked at this unknown and unfamiliar shelter. No amount of coaxing or bribing could get them to step inside. It wasn’t until I went around and opened the door at the other side of the barn that we could finally usher the horses inside. Once that other door was open the horses could see a light at the end and in their minds they were stepping into a hallway rather than a dark abyss. They still didn’t know what would happen while they waited out the storm, but they were more willing to trust their riders because they could see it wouldn’t last forever. 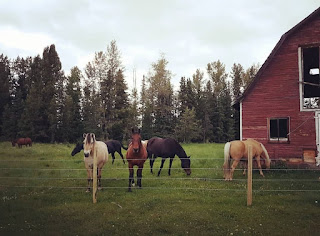 How often are we like those horses? We get surprised when bad weather and the storms of life come along, and we get so swept up in our own emotions that we don’t see the shelter right in front of us. Often it isn’t until we see the light at the end of the tunnel that we finally step into the shadow of our Heavenly Father’s wings instead of turning to Him the moment that first rain drop hit our face.

“Whoever dwells in the shelter of the Most High will rest in the shadow of the Almighty. I will say of the Lord, “He is my refuge and my fortress, my God, in whom I trust.” Psalm 91:1-2

We can draw a lot of similarities between us and horses, but the truth is we’re not horses, so we shouldn’t be thinking or acting like them. We aren’t prey animals with a brain the size of a large walnut; we are made in the image of God and have not been given a Spirit of fear but of power, love, and self-control (2 Timothy 1:7). We don’t need to be afraid of the fierce winds and driving rains of life because we know the One who calms the seas and quiets the raging storms. 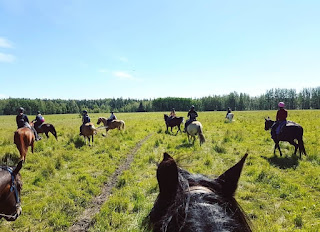 When the storms and earthquakes and famines of life advance upon us we can think to ourselves, “This came without warning and at an incredible speed. I don’t know how I’m going to get through it, but I know where I’m going to get through it.” The world will through all kinds of curve balls and monkey wrenches at us but we don’t have to stand out in the open and try to catch them as they come. At the first hint of trouble we can run to our Father and take refuge in His arms. There is no curve ball so fast or monkey wrench so large that God can’t handle, in fact He is not surprised by anything that’s happening in our world.

Sometimes we may need the door at the end of the barn to be opened to remind us that we’re not stepping into the darkness and making our home there forever. Rather, we’re walking into a hallway where we will worship our way through the chaos as we draw closer to the Lord. Storms never last forever. While our horses were waiting out the rain in the barn my girls and I were singing songs and playing games in our tent, and before we were back in the saddle riding through the sunshine. Trust that the Lord will not only provide you shelter through the raging storms of life but that He will guide you to greener pastures and still waters on the other side. 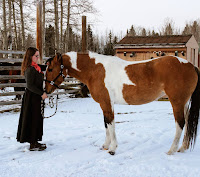 Email ThisBlogThis!Share to TwitterShare to FacebookShare to Pinterest
Labels: horses, storm, trust in the Lord