You can answer that question one of two ways.   The first way is the obvious way.  You look inside the mug and whatever is in there - is in there!  A lot of people who come to Camp Evergreen will put coffee in their mug.  I've tried coffee several times in my 54 some odd (key word being odd) years.  I like the smell of coffee - but not the taste of coffee - much to the chagrin of my lovely wife who would like to "have coffee" with me!  I'd say I've had maybe 3/4 of a cup - total - over my life span. 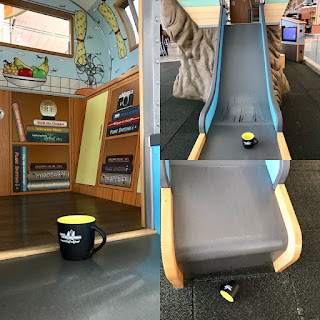 I'm happy with hot chocolate in my mug or even tea.  Happy with Mug Root Beer in the mug of course, but most often at camp I have milk in my mug.  This usually happens when I plan on starting to drink coffee, pour the milk in first, and then find out there is "too much" milk in the mug and no room for coffee.  Of course you can never have too much milk so I just end up drinking the milk. 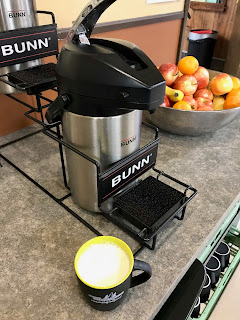 If you haven't noticed we have new mugs here at Evergreen.  In the catalogue and on online they looked distinctly lime green.  However, when they arrived at camp, they looked more lime yellow - if in fact lime yellow is actually a colour!  We decided to splurge this time and get the logo on both sides of the mug!  I know, crazy!  Now it doesn't matter if you are left or right handed, when you hold the mug up high enough, that logo is staring you right in the eyes!

The second way to answer the question, "What's In A Mug?" is simply this.  We like to celebrate things here at Camp Evergreen and a new mug is something to celebrate.  We have all sizes of projects on the go.  Big ones like the new lodge - now that's a big project.  Another big project is our new septic system.  No one really gets excited about a septic system, but we've been told in no uncertain terms that before we get occupancy of a new lodge - we need a new septic system.  So we're doing our best to get excited about sewer!  Yippee!

We have some smaller projects.  Cabin 15 is up on skids ready to be moved so John, our Activities Director, has a new office/workshop.  Just one look at his desk and you can see he needs more room! 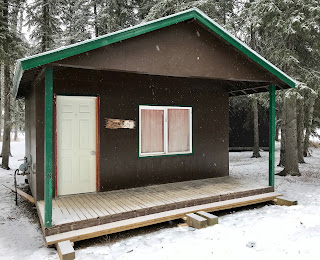 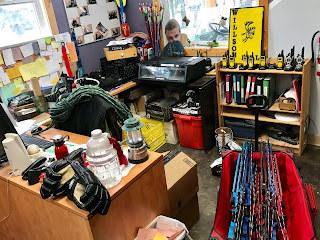 We've installed the new beverage counter which looks great!  Thanks very much to Stephen at Legacy Kitchens and our own Rolf for making this possible. 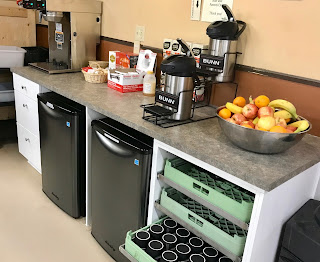 So in the grand scheme of things a single mug would be one of the smaller new projects we're celebrating, but we're celebrating.  So what's in a mug?  Our camp logo - Camp Evergreen Reaching Higher.  Yes I know it's technically on not in, Kevin!  :) 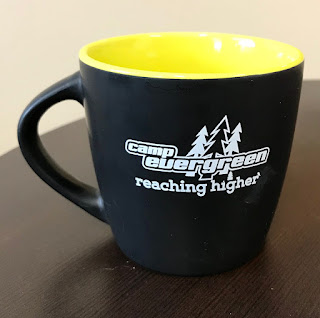 Why do we want to reach higher?  Well today is the last day of early bird registration for our summer camps.  We have 736 campers already registered!  Seven hundred and thirty six!  (Looks more impressive written out :).)  That's 105 campers ahead of last year at this time.  Six of our camps are full.  We have campers on the waiting list.  We need to reach higher so we can share the life changing Good News of Jesus Christ to more children, youth, and families.  It's as simple as that.

Thanks for your continued support and I invite you to reach higher with us in 2019. 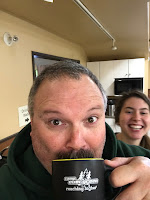