Larry and Linda from Linden!

It's been a busy week here on the new staff homes.  Larry and Linda from Linden (try saying that 10 times quickly!) started painting the Red House.  Larry and Linda's daughters, Lindsey, Leslie and Allison served on seasonal staff here at Evergreen.  Larry and Linda were also here in 2013 leading one of the Mennonite Disaster Service teams working on our new cabin build. 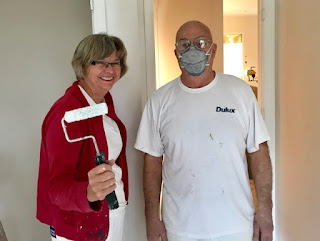 Craig and Jordan were finishing up the back entries and Craig spent a second day on the Red House basement.  Ben and Andrew returned for their third trip to bring the cabinets in both homes - oh so close to being finished. 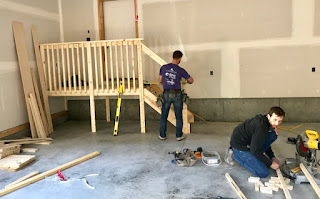 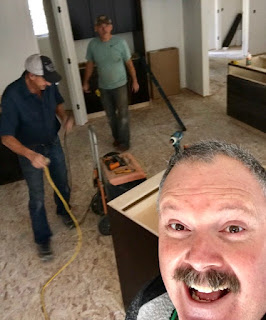 Han continues to work his way up with the stone on the Green House.  He only has a small window of warm enough weather during the day and apparently there is a big difference between the mortar setting and freezing!  And the Green Acres boys were back.  Kevin, Daniel and Kurt were doing what they do best, working the landscape.  And that brings us to the blog word of the week - Kevin! 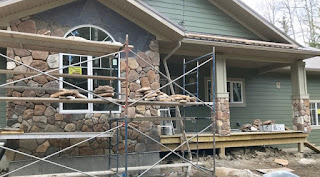 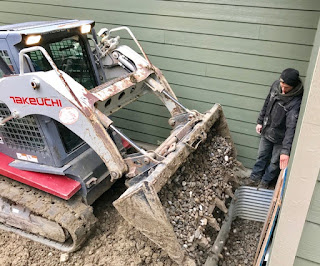 When I said Kevin, some of you might be thinking Kevin from the Pixar movie Up.  Nope, we're talking about our own Kevin Thiessen.  I appreciate Kevin an awful lot.  (like lots)  Kevin has been deeply invested in Camp Evergreen either on the building committee or the board of directors since before my time here at Evergreen.  Kevin likes numbers - lots of numbers.  (I on the other hand like the number four)  Kevin especially likes all the numbers that make up our annual budget. 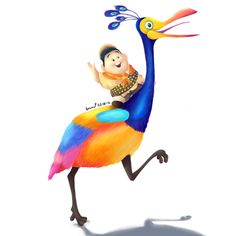 Kevin also likes to work.  If there is a rake lying around on holidays he'll pick it up and start raking the beach! (true story)  He combines this love for numbers and hard work as he serves Camp Evergreen.  This picture is Kevin under the Green House patio, back filling Alberta clay - by hand!  (by hand people!) 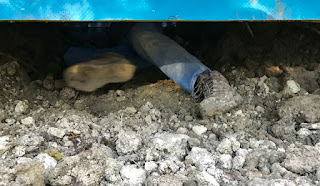 A HUGE thanks to Kevin.  So I thought I would let you get to know him better with 10 "how well do you know Kevin" questions.

Favourite pop - Coke
Favourite chocolate bar - Three Musketeers
Favourite ride at Disneyland - Thunder Mountain (yes!)
Number of children - three sons - two of which have worked at Evergreen
Married - to Jennifer for 24 years (wonderful years he said!)
Favourite Mennonite meal - Roll Kuchen with Rogers Golden Syrup  - hold the watermelon
Favourite dessert - blueberry pie he said with a wishful voice at breakfast this morning
Number of spreadsheet pages he works with for our budget - 40
Year he worked here on seasonal staff - 1991
Something we don't know about him - Kevin tried out for football in high school when he was 90 lbs and they couldn't find equipment small enough!  (Go Seahawks Go!)

Why is Kevin so deeply invested in Camp Evergreen?  It makes his blood boil (in a good sense).  He also feels that we are all supposed to be a spiritual impact on people and because camp has such a huge impact, Kevin wants to "put his money where he gets the most bang for his buck!"  And he is doing just that!

Next time you see Kevin, bring him a slice of blueberry pie and say thanks!

Thank you for your continued support. 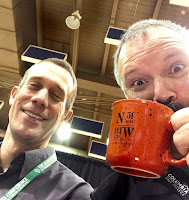 Pfefferminz Kuchen And A New Lodge

One of my favourite memories as a child growing up was the day Grandma baked pfefferminz kuchen - you might know them as peppermint cookies.  Grandma lived with us from when I was about 11 until I was out of high school and baking day was definitely the best day of the week!  She would start baking the cookies early in the morning and soon the smell of ammonia would be wafting through our house.  As she pulled the sheets of cookies out of the oven, I would be there, eating them as fast as I could while they were still very hot.  (FYI eating them frozen is also very tasty!) 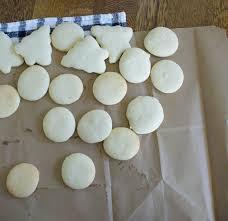 For some reason I was allowed to eat as many cookies as I wanted - on the day of baking.  This may be selective memory on my part, but I remember eating a lot (I mean A LOT) of cookies straight out of the oven.  The rest of the time mom made a valiant attempt to limit my cookie consumption, but let's just say that peppermint cookies didn't last long in our home.  I've made peppermint cookies a couple of times trying to keep the tradition going, but so far they have not come out of the oven even close to the fluffyness of Grandma's! 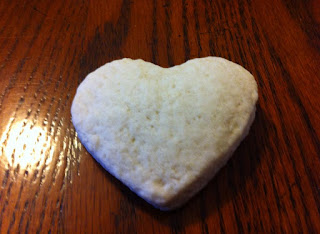 How do peppermint cookies tie into a Reaching Higher blog?  (Well it is a bit of a stretch, even I will admit that.)  Part of enjoying the cookies was the anticipation.  When you saw the dough in the mixing bowl and the cookies on the baking sheet, you knew something good was coming!  Once they came out of the oven the whole house would have this glorious aroma and you could hardly wait to eat them.

And as an added bonus...a new lodge will allow us to make great cookies, lots of cookies.  Maybe I'll have to give Ken my Grandma's secret recipe! 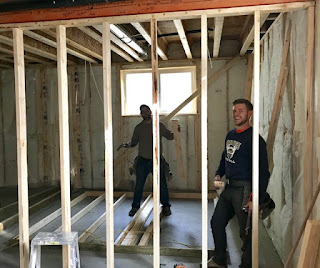 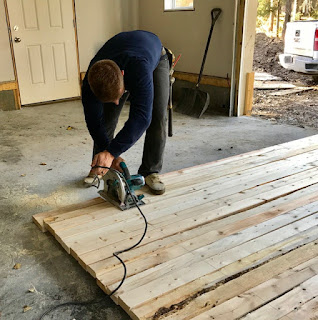 The new staff homes continue to move forward.  Gary (finish carpenter) anticipates finishing the red house today.  Stonework continues on the green house.  Craig and Stu were working on framing the red house basement bedrooms and bathroom.  I was actually "helping" Craig with his jig and crib.  We certainly weren't dancing or making a baby crib, this crib had something do do with walls and headers and studs.  (don't get me going on studs)  Both homes have a garage door and Ben and Andrew were back for their second of three visits installing cabinets. 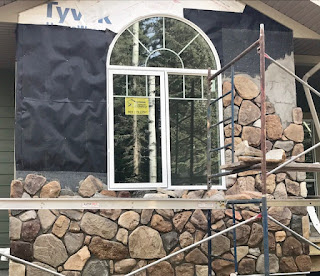 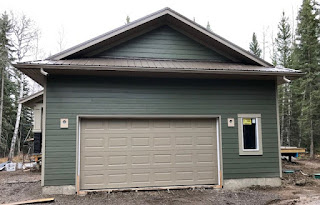 All that talk about pfefferminz kuchen - I may just have to skip work early today and make a batch! 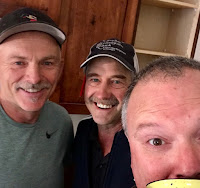 Hello from a very beautiful Camp Evergreen.  Yesterday we reached a high of 21 and as you walk around camp the leaves are crunching under foot.  Most nights dip below freezing, the canoe pond pump has been taken up for winter, we've had our second snow fall and our coldest morning so far?  Minus 10!  Winter is coming, but we're really enjoying fall while we can! 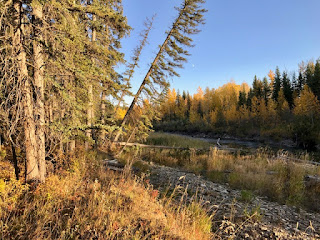 This weekend is Thanksgiving weekend and we have much to be thankful here at Evergreen.  We really feel that God richly blessed us this summer.  We had more volunteers than we've had over the last couple of years.  We had fewer hospital runs and discipline challenges.  Our staff really bought in to our vision of "seeing lives transformed by the power of Jesus."  We're very thankful for the 476 campers that we know of who made a significant faith decision this summer. 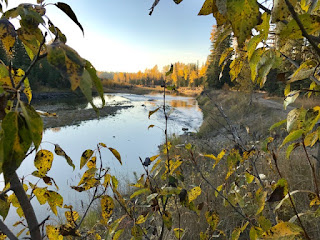 We're also thankful for our fall season.  Financially we are on budget, our new staff homes are getting closer and closer to being finished and we made it through our very busy month of September.  As an entire staff we put in extra effort to make sure our guests were well taken care of.  I'm thankful for our staff, each one bringing a unique perspective to how we do ministry here at Evergreen.  I believe I can speak for all of our staff that we are thankful for four days in a row with no guest groups!  (insert whoo hoo)  We intentionally do not book  guest groups over Thanksgiving weekend and are excited for the opportunity to sleep in, relax and re-charge as we have guest groups on site 19 days in a row once we return!

I remind myself almost daily that as we reach higher, every decision we make, every staff member that we hire, needs to be made with our summer campers in mind.  Summer camp is the heart of who we are.  It's an opportunity to share the Good News of Jesus Christ.  It's an opportunity to disciple our young people, to provide leadership training.  By the end of summer we're always tired.  Summer has long, long days, we're cooking for 200+ people, washing that many dishes.  But as tiring as summer camp is, I'm already looking forward to next summer! 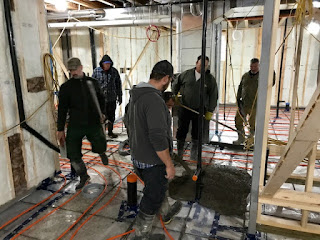 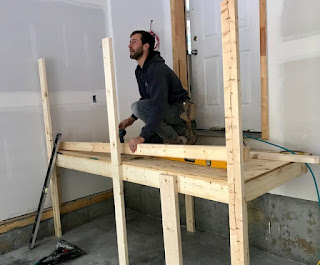 The homes continue to move forward.  Last Saturday the basements were poured.  Thanks Kevin and Green Acres for heading that up.  Gary our finish carpenter finished (slight pun) the Green House and has now moved to the Red House.  Craig and Jordan were back to build the stairs into the homes from the garages and install the basement doors.  Han and Peter arrived late in the week to start the stone work.  And Ben, Andrew and Don came today to install the cabinets in the Red House.  We ordered gravel to deal with the schrakjlijchness, but so far it hasn't arrived, so you guessed it - the mud is still pretty schrakjlijch out there! 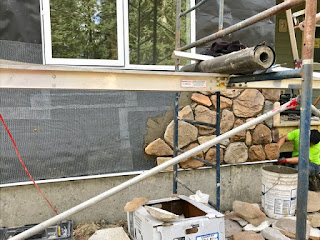 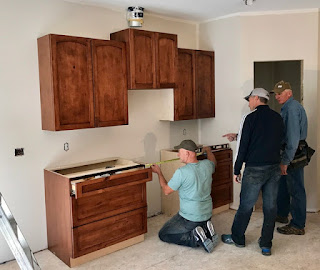