As both the Red House and Green House are getting close to completion I thought it would be fun to take a look back on how it all started.  A trip down memory lane as it were. 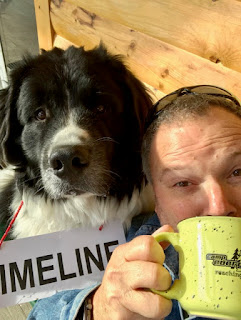 On Thursday October 20th, 2016, the excavator arrived all the way from Edmonton to dig the holes for the new homes.  Later on that same day, Craig, Jordan, Rolf and Kevin put the final stakes in the ground to map out house number one. 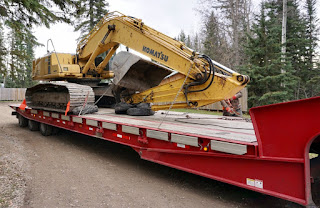 The next day, October 21st, Rolf was busy building a road back to house number two. 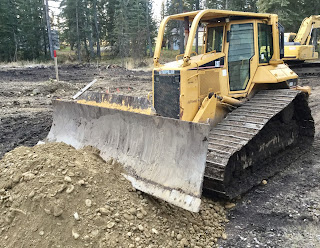 Our good friend Arnold from Edmonton, arrived on Saturday the 22nd to start digging the basements.  It seems like a long time ago already!  Craig needed to do some fine tuning on the dig and so he brought his own mini excavator!  (BYOME)  Let me say one more time how much we (I) like and appreciate Craig! 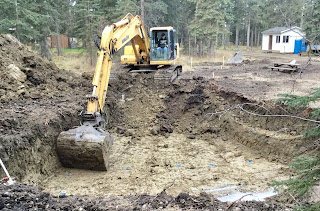 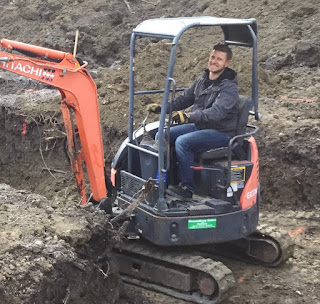 Remember when the blog word of the week was schrakjlijch?  Well when we started working with the footings on October 28th it was very, very schrakjlijch down in the hole. 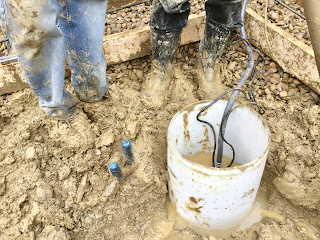 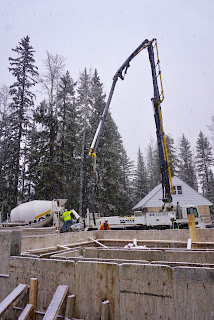 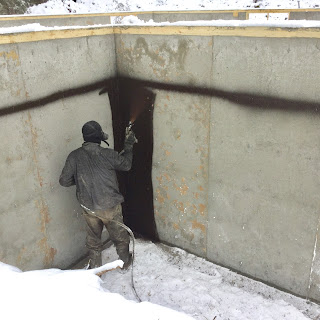 A month after we started digging the basements our building packages from Star Building arrived on site.  A big shout out to David for taking care of us at Star.  And on November 29th, the first beam on house number one is up!  I remember making a comment about beam me up Scotty - in reference to our framer Scott.  Thanks again Scott and Brian for serving us so well through the good weather, cold weather, super cold weather and then...the mud! 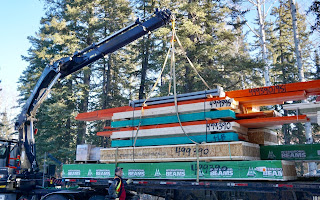 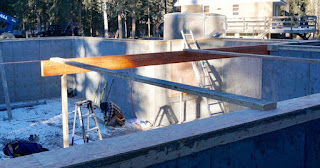 It was a cold winter and I remember nail guns having a hard time working never mind the framers and volunteers.  Here is Don from Gem on December 1st screwing the floor down.  Right where Don is standing there is now a hardwood floor.  And we had two father/son combo's helping us on December 3rd.  Richard and Ethan from Gem and Brian and Kurt from Calgary. 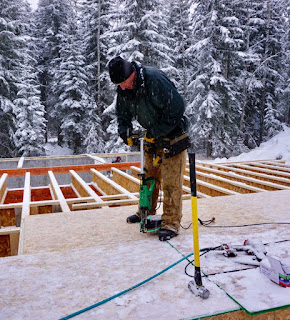 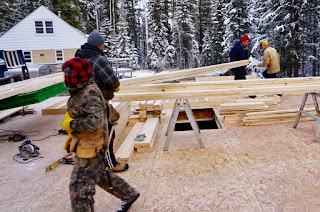 By December 22nd - less than a month after starting - house number one was looking like - well it was looking like a house was supposed to look like!  :)  And on December 28th one of our Alberta Mennonite Brethren pastors - Laurence was braving the cold and helping finish the garage. 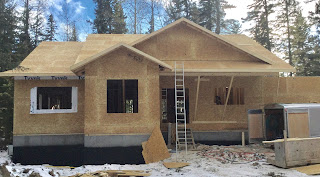 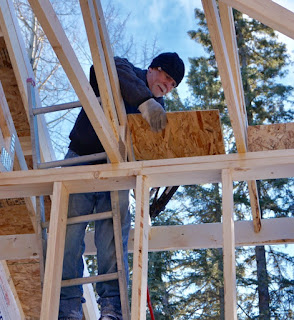 January 4th, 2017, the first beams were going up on house number two.  It was very cold, and if you look hard in the background you'll see another father/son combo, Walt and Nathan from Edmonton also braving the cold as work continues to progress. 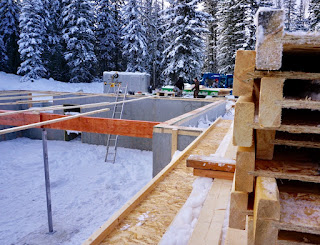 January 20th saw the tin roof up on house number one.  A big thanks to Ron and his crew from Duchess who installed the roof on both homes.  You may remember my reference to tin roof ice cream - tin roof is one great tasting ice cream. 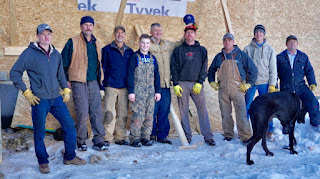 One of my favourite Reaching Higher stories comes out of the two roofs.  We received one invoice for both roofs in the amount of $4,000.  In the same envelope as the invoice, was a donation cheque for $5,000.  If you think about it, not only did we get two free roofs, we actually made $1,000!!  How fun is that?  Because of the incredible support we are getting, both homes are being built for approximately half their retail value!

Thanks very much for your continued support as we push to finish the year strong financially.  Stay tuned next week as we continue down the staff home timeline. 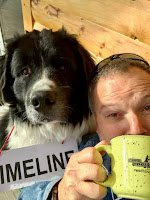 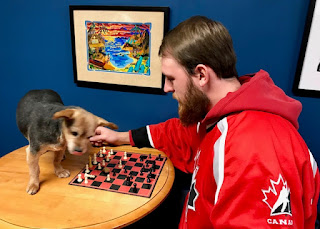 So lots of action on the homes this week.  Han and Peter are back working on the Red House stone.  They brought some propane, a heater and a fancy insulated tarp.  If you ever find yourself doing stone work in cold weather, remember - freezing and setting are not the same thing!  You're shooting for setting.  Our painters, Larry and Linda from Linden, continue to paint the Green House and Bob (what a great name!) has joined us in staining the mantle and stair railing in both homes.  Bob is from right around the corner and attends the Bergen church.  Its good to have local support! 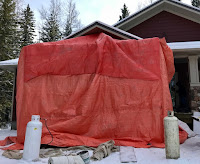 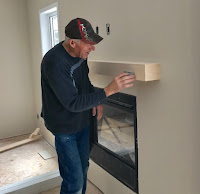 The basements are coming along, our plumbers are very close to having the hot water connected.  Poly and final insulation went up in both the Red and Green house basement walls and our electricians were back finishing the Red House.  Next week is scheduled to be just as busy.  Still no official move in date from Craig, but we're getting pretty excited! 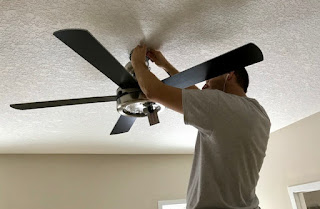 The blog word of the week is check.  Or is it cheque?  Or maybe Czech?

I used the word check once back in grade four when I said checkmate as the Grandmaster of the tournament.  To be fair the tournament only had about three students and I'm not sure who was more surprised with the result, myself or Steven Collins.  I haven't really play chess since grade four as I wanted to retire a champion.  According to Google, Grandmaster is the highest title a chess player can attain.  Once achieved, the title is held for life!  I'll try to beat Scamp next time I play.

Or you could spell it cheque which is a great segway into asking you to consider helping us finish the year strong financially.  Our operating budget calls for $50,000 to be donated by churches and individuals in the months of November and December.  We had a few unexpected expenses this year in the way of furnaces and hot water systems, your support would be greatly appreciated as we continue to reach higher!

We could also mention check in the context of our upcoming Pond Hockey tournament Saturday, January 13th.  (Good thing its not on Friday the 13th!)  Using the word check is a little misleading as usually we're interested more about what kind of cheese the players like (cheese is a typical topic when Tom announces the game) as opposed to how well they can body check - as we try to keep checking to a minimum.  Two of our board members Eric and Cody missed the memo! 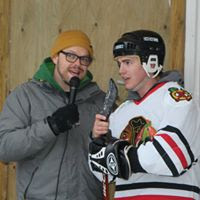 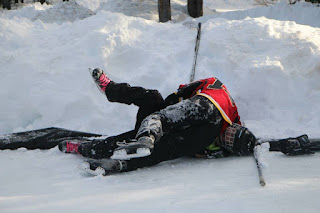 And finally, we can use the word Czech very effectively to tell a (very funny) story.

Hey Chad, Kenya see who's winning the race?  Iran up to Czech but couldn't see anything.  It looks like those two are Russian to the Finnish line.  I think it's gonna be...a Thai!

Thanks for your ongoing support! 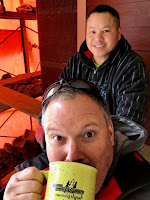