Can't Get Much Closer

Wow!  Unbelievable!  Blessed!  Thankful!  These are some of the words that come to my mind as I write this Reaching Higher blog near the end of 2017.  First off, where did 2017 go?  And if I'm asking that question - where did my first five and a half years go?!  It seems like just yesterday Bev and I made the trek from Cranbrook to Camp Evergreen during the summer of 2012.  Thanks very much Alberta and Camp Evergreen for welcoming and supporting us.  It has been a bit of a crazy ride at times, but we still feel like we're a good fit for each other.

It also seems like just yesterday (421 days ago to be exact) that we started the new homes.  If all goes according to plan Craig will be handing us the "keys" today (Friday) and we will be (very) blessed to be the first of many staff members living in the Green House - or should I now say the Kroeker house!  Words are somewhat inadequate to express the joy we will experience in the coming months and years.  I want to say a huge thanks to my Board of Directors, to Craig at Kingsmith homes, and to each one of you who have supported Reaching Higher. 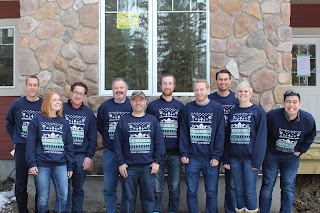 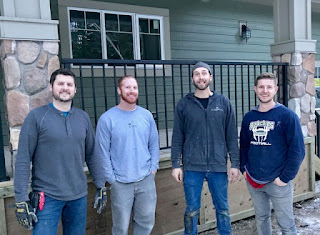 What's the most important part for me?  That the ministry potential we have as a camp is just getting started.  Think for a moment of the support the new homes received.  It's crazy (in a positive sense) that we are building both homes for under half their retail value!  Think for a moment about the support that we received this summer.  99 volunteers gave either a week or several weeks to serve at camp.  (Most of these volunteers put in long, long days.)  Think for a moment about the financial support we've received over the last several years from our supporters.  We are on track to have another strong financial year. 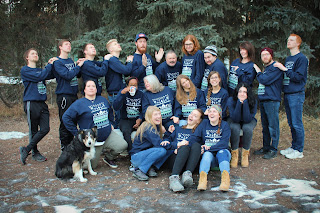 Now is the time to push a little harder, to dig a little deeper and focus our energy on increasing the ministry here at Evergreen.  We need to continue to Reach Higher in 2018.

We've added a new family camp this winter and three new summer camps.  Camp Evergreen needs to be creative so that we can see more lives transformed by the power of Jesus. 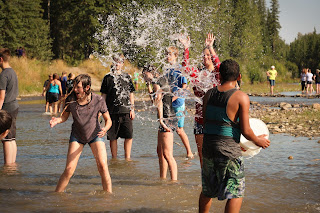 I believe the most important thing we can do in 2018 is to take some significant steps forward with our new lodge.  Together we need to turn our current momentum into pledges.  One of the questions I hear the most is - are you still building a lodge?  The answer is YES!  As a camp we want to see more children have the opportunity to make a life changing decision to follow Jesus.

I'll end this blog with one last picture of Jordan - putting on a skirt!  :) 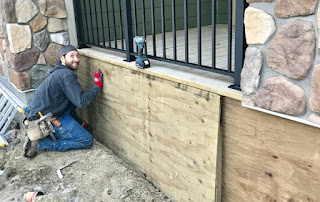 Thanks for your continued support!  May God richly bless you this Christmas season. 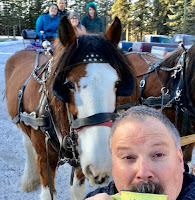 We left last weeks blog on January 20th with the tin roof going up on house number one.  Our volunteers continued to support us in the framing stage and on January 25th Dustin and Brian were back out helping us move forward. 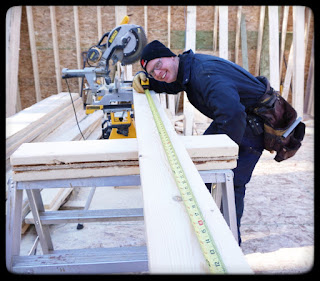 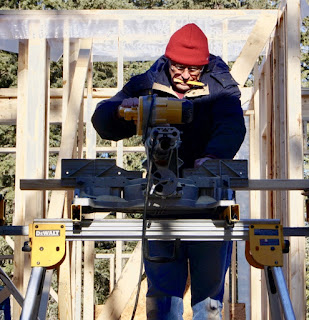 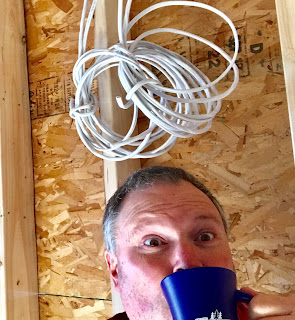 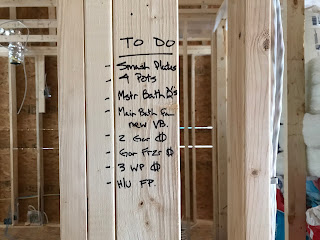 By March 1st (happy anniversary Bev!) - again with the help of our volunteers, house number two was very close to being framed. 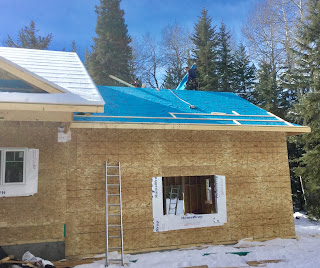 The next step was insulation and we recruited our winter staff to help.  Here they are on March 13th insulating away. 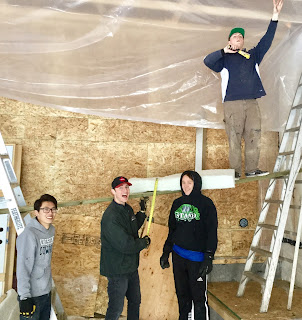 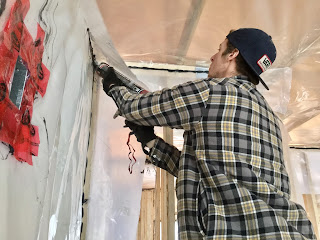 On March 31st we started drywalling the ceiling so that we could get insulation up in the attic. 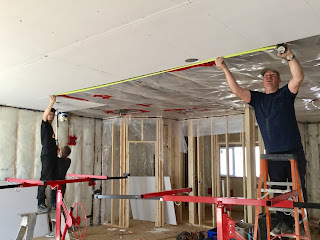 You might be wondering why such a long wait until we really started building again?  Some of us here at camp were wondering the same thing.  We were waiting to make sure the frost was completely out of the ground before continuing as both homes began their downward journey of inches to final settlement.  The homes sank enough that we had to adjust the front decks. 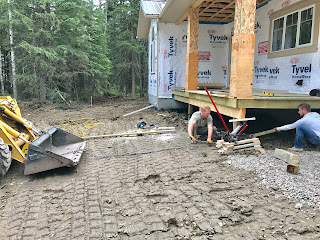 Near the end of July we were given the go ahead to start drywall and by July 26th we were well under way.  You could tell very quickly that this was not the drywall crews first rodeo.  It took just a couple of days to finish both homes. 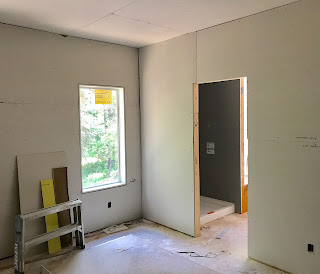 On August 12th we poured the garage concrete. 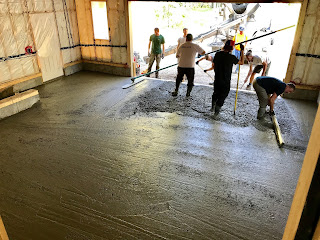 August 18th was the transition from house number one and two, to the Red House and Green House.  Calling the green house the Green House was a little confusing at times as some of us pictured growing tomatoes.  I can assure you that Ranger did not think tomatoes, he was still thinking of tin roof ice cream. 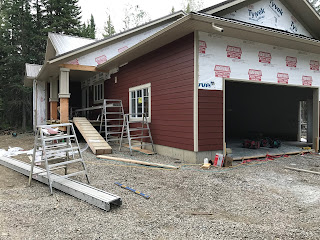 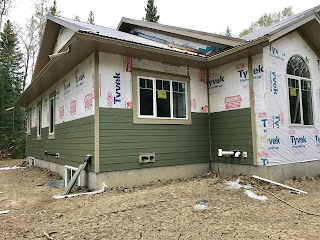 On September 5th, Arnold who dug the basement holes was back to install the sewer and water. 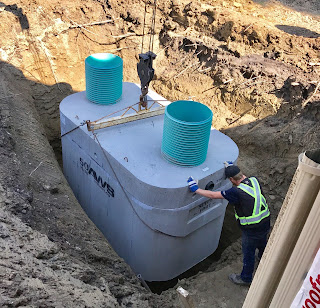 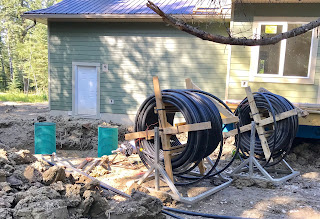 October 20th saw Ben and Andrew's first trip to install the cabinets.  A HUGE thanks to Ben for custom building our cabinets with a great deal of skill and love - at no cost to camp!  Han started his stonework and was able to finish in spite of some pretty cold mornings. 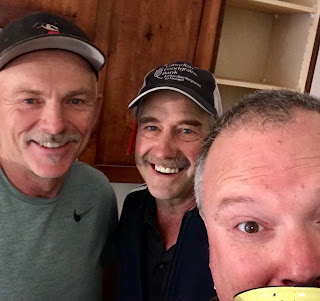 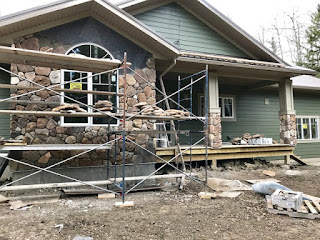 By November 17th the tile in the Red House was finished and the hardwood was well under way. 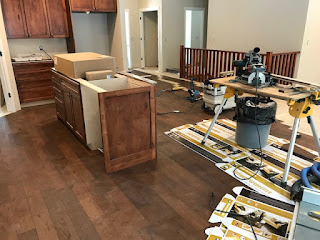 And my final picture for this blog is Craig taking off the cleats from the roof of the Green House.  We're not talking soccer cleats.  The Siders needed cleats to help them side the homes without falling off the ice cream - I mean tin roof.  Thanks again Craig and Kingsmith homes for your incredible support in allowing us to build both homes for what we anticipate will be under half their retail value. 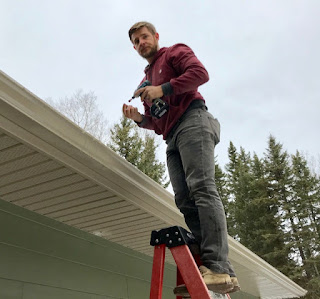 We are trusting that the excitement, support and momentum will continue as we now transition to the new lodge.  If you have not yet made a pledge to Reaching Higher I would ask you to consider.  It is only through your support that we will be able to continue to move forward and see more lives transformed by the power of Jesus. 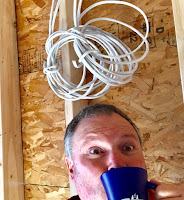